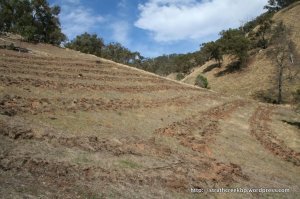 Ripping has been done with precision and care.

Managing the steep hills of Hidden Valley (Sites 3A & 3B) is being achieved with a combination of controlled grazing and revegetation. But, what is the best way to encourage woodland regeneration on steep, stony slopes,  where growing conditions are tough and where access is difficult?

It took quite a few months and many conversations within the project and with machine operators, before we finally felt confident of our plan and ripping got underway in Hidden Valley. An experienced machine operator, John Hamilton from just over the range at Dairy Creek, took two days to finish the job, pulling 3 tines behind his dozer. The end result looks great and has clearly been done with precision and care.

In this sort of country, ripping help regeneration in a variety of ways:

Disadvantages of ripping include the risk of erosion (which was considered carefully and  ultimately determined to be minimal here) and germination of weeds along rip-lines (which will be monitored and controlled, where necessary), though weeds should only be a short-term issue, as native ground layer plants re-establish the disturbed ground.

Now that the site has been ripped, the next job is to manually direct-seed the sites with a mix of local indigenous seed. We want the resulting regeneration to be sparse and appear like a natural woodland, so only parts of each rip-line will be seeded. The seed mix will comprise about 30% trees and 70% shrubs/ground-layer plants and the site will be seeded sometime in winter-early spring. There will also be some direct planting of seedlings along the rip-lines. Given the success of the first direct seeding carried out at the Joblin Site, we’re all feeling pretty confident that this will also go well.

Now all we need is rain!

About half the area of this 60 ha site has been ripped, so most of the project’s direct seeding target of 30 ha will be met here in Hidden Valley.

The ripping has been done with precision and care.

Ripping did not impact on fallen timber. Project fencing is visible in foreground.

Ripping was only carried out in treeless areas.

Of course all ripping was done on the contour.