Direct seeding of King’s and a Granter surprise.

The King site, like most in this project, is generally steep so that most revegetation is done by hand. However, the site has a flat to undulating ridge-line, perfect for direct seeding and that’s just what Janet and Justus Hagen got up to a few weekends ago.  Here you can see their direct seeding machine being pulled behind their 4WD, scalping the ground where seed is then sown. Direct seeding usually occurs when soil temperatures have warmed enough for the seeds to begin germinating (in theory), though some seeds may not germinate for months or even years – waiting for just the right conditions.

In this case the direct seeding was supplementing the ground layer of native grasses and some herbs and the scattered grey box trees. You can find other site pics here and here and here.

Looking NE along the ridge-line and the nearly finished direct seeding job. New site boundary & fence-line to the left and white tree guards on the steeper slopes to the right.

Later that day, Project Officer Steve Joblin dropped into another of the project sites to check on progress. The Granter site had previously had roof-habitat tiles placed near the location of a Striped Legless Lizard (Delma impar) record (in Nov. 2012). This species is Nationally Threatened and had not been recorded in this district prior to the start of this project. These tiles had been checked on a number of occasions during the year for small skinks etc, but no more legless lizards had been found. However on this day, Steve was lucky! Though the stripes were not as clear as on a previous individuls, it was non-the-less a Delma impar and further proof that the site supports a population of these special animals. 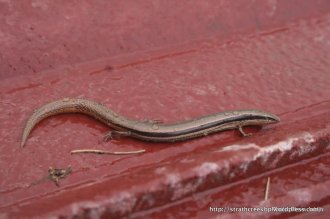 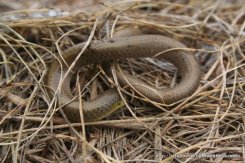